"Lost Effort" received a single release with three b-sides: two remixes and another noise/experimental track, "The Flint Robot has a Perfect Day". Both releases were on Futures Passed Free Music, which ceased in 2013. Thorn re-released the best material in October 2014 on ThornBrain is Really Bad at This - The Best of the Worst (2009 - 2011) and the leftovers on No One Needs Me - The Rest of the Worst (2009-2011).

All tracks written, performed and assembled by Austin Scholl 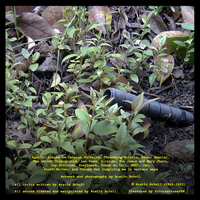 Most of the EP was improvised noise: "Echo to Canal Street" is Thorn's guitar held and strummed in front of his amp, "Knock Gabriel Knock" is both his guitar and bass being tapped while filtering through delay and reverb effects, and the "No One/Needs Me" bookends are based on mic static run through a phaser. Most of these are also run through numerous post-recording effects to increase the odd atmosphere. The two structured tracks, "I Feel Fantastic" and "Lost Effort", are also based around thick effects. A vocoder is used in "No One/Needs Me" and to create a mechanical sound throughout "Knock Gabriel Knock".

Every track was recorded with Audacity or Sonar 8, and edited in Sonar or Vegas Pro 9.

The cover is a photograph of a piece of rubber tubing Thorn found in his backyard. The photo was color manipulated in Photoshop, and the untouched version makes the back cover. Unlike other releases, the track listing is on the front cover; the back cover mainly lists Thorn's major inspirations for the recording of the EP.

Retrieved from "https://themidnightfrogs.fandom.com/wiki/The_Right_Way_to_do_Everything?oldid=8882"
Community content is available under CC-BY-SA unless otherwise noted.