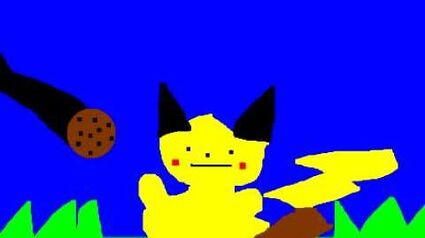 Really Shit Drawings of a Japanese Pokemon Thing by MYTB ROCK ON HOMIES is a short joke video by Mugiwara Yoshi and ThornBrain. It is made of bad MSPaint pictures by Yoshi, with him and Thorn voicing the characters as poorly as possible.

The video is a loose parody of BMNC, an MSPaint parodist of Sgt Frog; it makes fun of her use of Japanese words in otherwise-English dialogue, the use of outdated internet memes, Windows Movie Maker, and the children who have auditioned for her videos. The video is about Pokemon instead of Sgt Frog because Yoshi and Thorn were working on Pokemon Mystery Dungeon Abridged at the time they made the video. Thorn has gone on to admit that it does not parody BMNC as much as they initially thought.