Private Tamama is a main character in Sgt Frog Abridged and is a member of the Keroro Platoon. She is in a romantic relationship with Keroro, is heavily stupid, and is prone to incoherency.

Tamama is one of the dumbest characters in the series. She spent her entire life unaware that she was actually female, and she tends to say the strangest one-liners or interjections of the group (read "Notable Quotes" below).

Not much is known about Tamama's background or how her relationship with Keroro began. Shurara claims Tamama fell in love with Keroro when he said "Hi" to her, and Giroro says in Ask GiroDoro that the two got together before he and Dororo ever met Tamama and shortly before the platoon was sent on their first mission. While it is assumed throughout Season 1 that Tamama is male like her Keroro Gunsou counterpart, she discovers between Episode 9 and Episode 10 that she is actually female and reveals this at the end of Episode 10. It is unknown how both Tamama and Keroro were unaware of this, though Keroro's generally apathetic nature and Tamama's blatant idiocy are likely factors.

ThornBrain has stated that Tamama is in the Keronian equivalent of her twenties, but her immature appearance is due to her having Keronian dwarfism. Yoshi also initially revealed that Tamama is dyslexic, but this was never properly shown in-series, and by Season 2 it was dropped.

Tamama has the most noticeable differences to her Keroro Gunsou counterpart: she does not have a Dark side, never being overprotective of Keroro around Mois, nor does she ever think negatively of Mois. She also does not pass gas and is not so blatantly fond of sweets. The most she has ever been seen eating is a doughnut, which she believed could talk, and she is once seen screaming in terror while being trapped in a candy pile. On a more insignificant note, SFA Tamama's military rank is reduced from "Private Second Class" to simply "Private".

Tamama experiences a seizure after a botched attempt at fighting Taruru. She is visited by a vision of Jesus as a beetle and immediately becomes a prophet for the Church of Beetle Christ, though she admits that the vision probably wasn't true after questioning from Giroro. Ask GiroDoro confirms that she only did it because she was bored. She however does conceive Beetle Jesus's child through Keroro as Kemama, who is born in Episode 21 and grows rapidly from a baby to a giant Albatross, Eater of Worlds.

Tamama does not interact with many characters beside Keroro, whom she openly loves, admires, and affectionately refers to as "Sarge" (though by Episode 12, even she is sick of him). She may not interact with, or have relationships with, many people, though Episode 2 also hints that she doesn't think too highly of Momoka. She also mentions in Ask GiroDoro "[Mois is] a total ho-bag. I like her!"

Taruru looked up to Tamama in boot camp as a mentor, which drove Tamama insane. Tamama in turn abused Taruru similarly to how Keroro abused Dororo growing up.

Keroro: "Yep. Lost my motor skills. And now my sex drive."
Tamama: "I WILL REBUILD IT IF IT KILLS ME!" - Episode 4

"I come in the name of the Church of Beetle Christ. May you flip over your opponent and mate with the female." - Episode 18

"Man. I kinda wanted to destroy the planet before? But now I kinda wanna save it. There's good things here, like... seagull guns and... racecars with nothing to lose..." - Episode 23 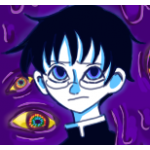