"Lost Effort" is a song written by Austin Scholl and recorded under his alias ThornBrain for the EP The Right Way to do Everything. The song is a driving instrumental heavily inspired by early Cabaret Voltaire; it is based around a repetitious drum track and a melodic bassline, then covered with a stretched recording of processed guitar and feedback loops.

The song was released as a single prior to the release of The Right Way... with three b-sides. Both releases were on Futures Passed Free Music, which ceased in 2013. Thorn re-released the best material in October 2014 on ThornBrain is Really Bad at This - The Best of the Worst (2009 - 2011), and Sawtooth re-released his remix of "Lost Effort" on his own compilation.

The single mix is the same song as the EP version but with a clear fade-in and ending. "The Flint Robot..." is an experiment from two years prior based around noise sampled into a rhythm track, then covered with friend Madcapoperator's guitar drone and airy reading of the lyrics that would later become "Tell Us if You've Seen This Guy Before". The other two songs are remixes, one by Sawtooth, the other composed of every "Lost Effort" track except for the bass being reversed in Sony Vegas without taking into account splicing breaks (the title is self-deprecative). 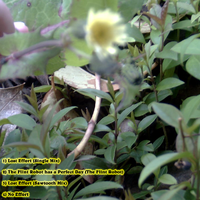 The cover is a photograph of a dandelion Thorn found in his backyard nearby the rubber tube from the Right Way... cover. The photo was manipulated in Photoshop in much the same way as said EP, and the unedited version is used on the back cover.

Retrieved from "https://themidnightfrogs.fandom.com/wiki/Lost_Effort?oldid=7551"
Community content is available under CC-BY-SA unless otherwise noted.